On this season of The Real Housewives of New Jersey, fans have watched as Danielle’s friendship with Margaret Josephs came to a crashing end, resulting with Danielle pulling her former bestie’s pony tail.

While Danielle has since decided to leave RHONJ, her ex-husband Marty is coming to her defense, claiming that Margaret is just using Danielle for a storyline on the show.

“I laugh at all these stories about Margaret [Josephs] suing Danielle,” Marty told Radar Online in an exclusive interview. “I know she has threatened that before. It’s another example of Margaret using Danielle to get attention when she can’t get any by herself.”

“Margaret should be worried about her career with the franchise if she ever stops talking about Danielle Staub,” he added. “She should be very careful.”

On a recent episode, Teresa Giudice invited the cast to go shopping and that is where things between Danielle and Margaret erupted. Marty, who has been around the RHONJ cast and crew for years now, seems to think they had an ulterior motive when confronting his ex-wife.

“The after show is a good example of how the ‘full time’ cast members constantly need to attack Danielle, a ‘friend,’ without her there to stand up for herself,” he said about how the cast has used the incident for additional airtime. “Danielle has no platform. They get to spew whatever bulls**t they want and go unchecked.”

“What ‘friend’ across all the franchises is the main focus of the season?” he added.

While RHONJ surely won’t be the same without her, violence should never be tolerated and at this point, it makes sense for her to depart the show. 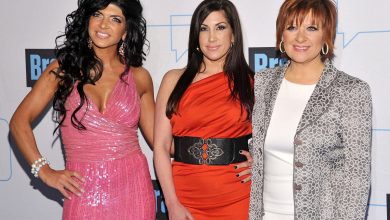