Luann De Lesseps Promises RHONY Season 12 Is The Best One Yet: “It’s Like, Bethenny Who?”

Luann de Lesseps promises that the upcoming season of The Real Housewives of New York City is the best one yet, even though longtime Housewife Bethenny Frankel has once again left the franchise.

As Page Six reports, Luann sat for an interview with Rob Shuter on his Naughty But Nice podcast to promote RHONY season 12 and spilled the beans about what fans can expect.

“I feel like this season, because [Bethenny’s] not there, the women have a place to express themselves and show more of their personality,” she said, according to the gossip outlet. “And I think this is the best season yet. It’s like, Bethenny who? It’s the best season ever!”

“She’s a big personality, she takes up a lot of oxygen,” Luann continued. “I feel like people can breathe now.”

As previously reported, Bethenny decided to leave production hanging by quitting the show on the eve of the cast’s first time getting together to film.

Having appeared on seasons 1-3 and again on 7-11 of the series, Bethenny may be eponymous with RHONY but that is all set to change with the show’s upcoming April premiere.

Leah McSweeney is joining RHONY Season 12. She was originally planned to be introduced as a friend of Bethenny’s before she decided to leave the show. (Photo: Bravo)

According to various reports, Bethenny never planned on leaving the show initially and in fact, she is credited with bringing new Housewife Leah McSweeney around the other women.

Her departure may have been shocking to fans at the time but it now makes sense considering all of the other longtime Real Housewives that have departed the franchise within the last year.

RHONY Season 12: Watch The Intro And Hear The Taglines Before The Premiere

For her part, Bethenny has since made it clear that she is definitely moving on from the franchise that made her famous.

Just last month, she announced that she has partnered with HBO Max on a new competition-style docuseries called The Big Shot With Bethenny.

According to an official release from the streaming service, the episodes will each be a half-hour each and according to the release, “the next generation of business moguls will compete for a chance to be second-in-command to business tycoon and Skinnygirl founder Frankel, and win a coveted position working on her executive team.”

Bethenny is set to star in a new show on HBO Max and won’t be a part of RHONY season 12. (Photo: HBO)

“Aside from motherhood, what truly defines me as a person is being a driven, passionate and hard-working woman determined to make the impossible possible,” the former RHONY star said in a statement about the new show.

“My mantra is to come from a place of ‘yes’ and to find and create the solution,” she continued. “I am an executor of visions, and I share and impart that information to those who work with me. MGM has been neck-in-neck with me with ideas and their execution. I couldn’t be more thrilled to continue my longstanding relationship with Mark Burnett on this series and pay this American Dream story forward.” 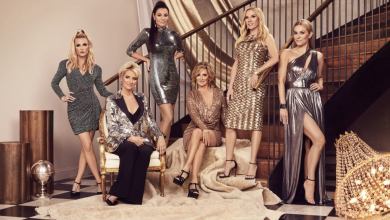 WATCH: Catch Up On ‘The Real Housewives Of New York City’ Before The Season 12 Premiere