Lisa Vanderpump isn’t ruling out a potential return to The Real Housewives of Beverly Hills.

Despite only leaving RHOBH midway through the last season, LVP is already discussing a return to the show as she promotes the new season of Vanderpump Rules. In an interview with Entertainment Tonight, she explains that she would “never say never” to returning.

“I can never say never about anything, but I don’t know,” she said. “It’s not what’s in my radar right now.”

WATCH: Lisa Vanderpump Won’t Rule Out A Return To ‘The Real Housewives Of Beverly Hills’

In recent weeks, rumours have been swirling about a feud between Brandi Glanville and Denise Richards, with recent articles revealing that Brandi and Denise may have hooked up. Brandi reportedly revealed that news to the RHOBH cast, leading to the demise of their friendship.

When asked about the drama, Lisa remained coy. “I just hear a little about a hookup situation,” she explained. “But I haven’t heard much about it all. No comment on that one! I won’t be [watching this season.]”

The Real Housewives of Beverly Hills will return later this year. 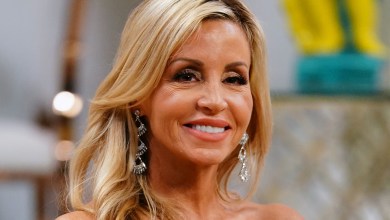