Vicki Gunvalson and Emily Simpson are the latest duo among the RHOC cast to duke it out.

The Real Housewives of Orange County may be having a better season than last year but a quick search of viewer reaction on social media last night shows that something is still missing for fans. Vicki Gunvalson is doing her best to promote the season, however, getting into an argument with RHOC co-star Emily Simpson following last night’s new episode.

Emily has been pretty bold in her confessional interviews this season and while fans seem to be impressed with her new attitude following her passiveness last season, Vicki isn’t a part of that group. After seeing Emily make fun of her age, she took to Twitter to call out her co-star.

Using the hashtags “disrespectful” and “rude”, Vicki’s taking to Twitter to defend herself against Emily just prove that this cast just can’t seem to get along and that may be a part of the reason why fans aren’t connecting with the show as much as they used to.

Also Read: The Problem With Braunwyn And What Bravo Can Do To Fix RHOC

While Bravo viewers tend to like the drama, they also like to see a genuine group of friends. Emily joined the cast last season along with Gina Kirschenheiter and unlike previous additions, they didn’t actually know the cast beforehand. Ever since, there seems to be a disconnect amongst the group. Rumours are swirling that production is looking to make changes with the cast for next season and while Vicki reportedly has her orange back, it’s not clear where the other women, including Emily, stand with the network.

Personally, we’re here for both Vicki and Emily this season. They’re both bringing it in their own ways, with Vicki showing off her engagement to Steve Lodge while navigating the very real and intense drama with her longtime friends, and Emily is bringing viewers into her home and quite possibly, an unhappy marriage. Both are cringeworthy in their own ways and exactly what we look for from our Real Housewives.

While the two are clearly unhappy with each other now, a team up between them on the next season could make for some very interesting viewing. 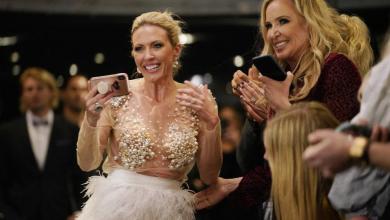