Kate Chastain Reveals What Ended Her Friendship With Hannah Ferrier: ‘She Was Talking About Me Poorly Behind My Back’

Kate Chastain opened up about the end of her friendship with Hannah Ferrier on a recent episode of the Juicy Scoop podcast.

The two first connected due to their Bravo connection and became fast friends. Kate is Chief Stew on Below Deck and Hannah holds the same position on Below Deck Mediterranean. While that may seem like the perfect friendship match to some, the two ended up having a falling out and reportedly haven’t spoken in years.

On a January 30th episode of Juicy Scoop, Chastain confirmed that they are no longer friends and revealed exactly what happened between them — at least from her point of view, of course.

“Unfortunately, I don’t know if it was insecurity or jealousy or what it was but she was talking about me poorly behind me back, and [the rumours] weren’t even true, what she was saying, and it got back to me,” Kate told Juicy Scoop host Heather McDonald.

“You know what? People get drunk, maybe you say some things, try to be cool, I don’t know, but I messaged her and I was like listen, it wasn’t that cool what you said,” she continued.

“You knew that she said something about you, just to someone else why you were about?” asked Heather.

“In production, replied Kate. “We use the same production team and it got back to me. So I messaged her and I had just seen her in New York — she was in town for Watch What Happens Live — I drew through the night from Florida. I hurried to make it here for her and then I found that out and was like ‘Oh’.”

“This is a real bummer. She has not replied [to my contacting her],” continued Kate. “She never replied to me, that was in August. If you were really my friend, you would apologize and say ‘Oh I did say that’, you know, answer, or deny it. She never even answered.”

It’s been somewhat of a mystery as to why these two are no longer friends and with Kate’s comments, it’s clear that they have some work to do if they ever want to be friends again in the future.

As she did say on the podcast, the two share a unique experience by both being Bravoloebrities, so it would be a shame for a potential miscommunication to end their friendship for good.

Below Deck airs Mondays on Bravo. ‘Below Deck’ Producers Reveal They Had To Get A Cast Member Professional Help: ‘There Were Danger Signs’ 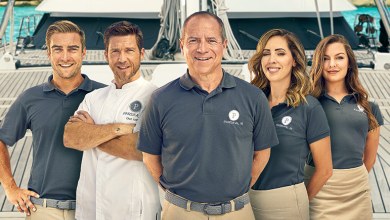