Jon Stone is sharing his side of the story.

In a new interview with Us Weekly, Jon claims that his ex-girlfriend and Very Cavallari star Brittainy Taylor still isn’t over their relationship, despite her hooking up with new boyfriend PJ Kellogg.

“She’s not over this relationship, there’s no possible way she can be and she tells me that,” he told the gossip outlet. The two dated on the first two seasons of the E! reality show before breaking up on the currently airing third season.

“Now looking back, I have talked to her a couple times,” he continued, adding that he is confused by her behaviour since watching the show. “Some of the decision-making is bewildering to me. I was with this guy for four and a half years, wait a couple months then I’m going to get a boyfriend. If you can’t see the heartache coming from miles away.”

This season, Very Cavallari viewers have seen Brittainy move on with a new relationship but on a recent episode, there were indications that things weren’t as perfect as she may want people to think. Kristen Cavallari almost fired her after she failed to put a few items on sale on the Uncommon James website, which is part of her job.

Now that he is removed from the situation, Jon is seeing things from a different point of view and isn’t sure he would want to put his life in front of cameras in the future.

“We broke up about six months ago,” he said. “So many things would have to change. As the camera pulls back and scene widens you get a different perspective. And as the camera has pulled back on this scene my perspective is like, ‘Wow, I’m not quite sure I ever want to do that ever again.’”

“When two people make a commitment to each other people are going to fall in and out of love. It’s just a matter of how they hang on and persevere the peaks and valleys,” he continued, adding that Brittainy broke up with him on the first day of filming the new season. “And in my mind I had made a commitment to her so this is just a rough time and we need to explore avenues to fall in love again. She just felt differently and that’s OK. It was just alarming to me. It was really disheartening and it was just really sad. It really hurt that she would put our relationship in such a petty moment.”

After hearing what he had to say (and it was a lot), it’s clear that he is still bitter from his relationship with Brittainy ending. While he may find her behaviour “petty”, it was clear from watching the show that they just weren’t that into each other so we don’t really blame her for moving on. 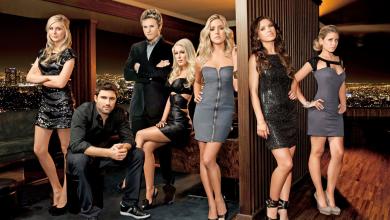