Magali Gorre Tells All: On Life After ‘Real Housewives Of Cheshire’, Why So Many Originals Are Leaving, And Is She Feuding With Lauren Simon? (EXCLUSIVE)

There was a lot of pressure on The Real Housewives of Cheshire when it debuted in 2015 and after 10 seasons, the show has stood the test of time and is still going strong.

Recently, I had the chance to connect with Magali Gorre, who starred on seasons 1 and 2 of the ITVBe hit. Together we covered it all and in our interview, which you can check out in its entirety below, she opens up about what she thinks of the new season, why she believes so many originals are walking away from the franchise, and she reveals the scoop on her feud with current Housewife Lauren Simon.

Hi Magali! It’s great to connect with you. With the upcoming premiere of The Real Housewives of Cheshire, we wanted to touch base with you and check in. How are you?
Thanks for asking! I’m doing great. I’ve been very busy the past year, traveling between Europe and South America. We’ve been up to so much: my husband has recently been knighted by the president of Suriname, my oldest son Kenji is getting married and is playing for one of the best football teams in Portugal.

My second oldest son QG is doing amazing with his music and has released his latest song. My youngest son Aidan just got a scholarship to play football. In short, it’s never a dull moment with the Gorre family.

The trailer for the new season of The Real Housewives of Cheshire just landed. Lauren Simon is back, and there’s also a new Housewife. What did you think of the sneak peek?
I liked the mirror, mirror theme but I was confused with Lauren’s return. What will her storyline be? In Cheshire many people are confused, but we’ll have to wait and see. I just remember the time she wasn’t on the show and the reunion and to be honest, nobody missed her.

Have you heard from Lauren since it leaked that you two were having issues?
Gosh, I’ve lived 21 years in Cheshire and people here really like me for who I am. I think I have a great fan base with fans of The Real Housewives of Cheshire and Lauren knew that so she always had my back. However, things changed with her behavior when I chose to leave the show. I still don’t know why.

I have never had a single argument with her, even though she acts like a spoiled child at times! I understand she has a hard time with her personal life, but she shouldn’t be rude to me for no reason. Jealousy is a disease and I hope she gets better soon.

Magali Gorre and Lauren Simon both appeared on the first two seasons of The Real Housewives of Cheshire. (Photo: ITVBe)

It would have been a good episode if they had cameras with us when I called her out in our local grocery store.

You’re on good terms with the rest of the Housewives but it seems like you have closed the door on ever returning to the show. Would you ever consider doing another reality show?

Never say never, but watch this space! My family is never dull and we are working on a few projects and life is good. It’s not always easy but we have dreams and will work towards them.

If it’s OK, we’d like to get your thoughts on some of the drama happening elsewhere in the Real Housewives universe. Do you watch any of the other cities?

I’m ready! I love how real the drama is on the other shows and I admire them for showing that. I love New York and Beverly Hills; they have my respect. And I can’t wait to see what happens with New Jersey and Atlanta. They’re on another level.

The Real Housewives of Melbourne is set to return for a fifth season later this year and after a years-long hiatus, only a few of the original Housewives are returning. What do you think about all of the changes they are making to the show? It’s almost like a soft reboot.
I am friends with Jackie [Gillies] and know that she wants to move on and start a family, so I’m happy that she is moving on to another chapter of her life. She loves positive energy and is a good person. I understand her reasoning for leaving the show. I also chose to leave the show to focus on my family and at the time, my dying father.

As for the OG’s they are great TV and I’m glad they are still on it.

RHOBH premieres next month and it will be the show’s first season without Lisa Vanderpump. Do you think the show will be as successful without her?
Fortunately, Lisa is still on TV [in Vanderpump Rules] so the fans will still see her. Will the show will be different? Yes.

She was a leader of the pack and showed her great life on TV and now, like the rest of the fans, I’m dying to see who is leading the pack now. As they say, wearing the crown is heavy.

RHONY is also about to return without Bethenny Frankel and RHOC has let go of Vicki and Tamra. Were you shocked by any of the recent big Bravo departures?
Bethenny can easily have her own show, like me. We have a lot going on to show and she is a strong character. People like to see her and love her or hate her, she makes good TV.

Lisa Vanderpump, Vicki Gunvalson, Bethenny Frankel, and Tamra Judge are just some of the original Housewives that have left their respective franchises in the last year. (Photo: Bravo)

As for Vicki, she had the cast members against her and her storylines dried up and when you start saying things like, “get off of my show”, the bosses will show you nobody is bigger than the show. There is a production company and they will use you for as long as they can.

I think Tamra and Vicki will need to learn how to live without the show. Tamra, for example, paid a huge price to join the show with her divorce and family breaking apart. Now, I hear her family is back together without the cameras.

Filming on the show’s upcoming eleventh season has since been suspended due to concerns over the coronavirus pandemic, according to recent reports, putting into doubt the show’s previously announced spring premiere timeline.

Make sure you stay up-to-date with @MagaliGorre on Instagram. 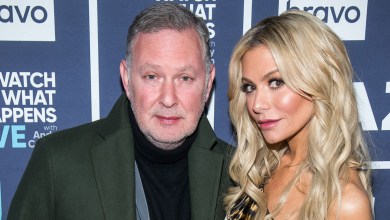