‘Below Deck Sailing Yacht’: Adam Glick Denies Having An Anger Problem On ‘Watch What Happens Live’, Blames His Behaviour On His “Kind Of Functional” Relationship With Jenna MacGillivray

When it was first announced that Chef Adam Glick would be returning to the Below Deck franchise with the series’ latest spinoff, Below Deck Sailing Yacht, fans were ecstatic. But as the season has gone on, he has displayed some troubling behaviour both in his relationship with Chief Stew Jenna MacGillivray and the relationship with his other crew members.

Adam was forced to face the music on last night’s Watch What Happens Live, and Andy Cohen wasted no time in getting straight to the point: Does Adam have an anger problem?

“It’s pretty clear that I had an attitude while I’m working on this incredibly stressful charter yacht, mixed in with having a girlfriend that I made very clear I didn’t want to get into this deep relationship early on in a working season,” he responded. “This is important work.”

“I didn’t handle my situation as well as I could have,” he continued. “I think having an attitude adjustment would have been a huge, huge help for me but at the time, and in the circumstances, that level of anxiety, stress, and the general workload, coupled with being in a relationship that’s kind of functional, it was very, very difficult for me. And it shows. There is no question that it shows.”

“I think the lesson for me, after 12 long years living and working on the open ocean, I’m fucking over it. I’m ready to have a ranch, live my life on land, grow a beautiful garden and do the things that I wanna do to feed people organically over a fire,” he said, laughing.

“None of those things I can do on a boat.”

WATCH: Adam Glick From Below Deck Sailing Yacht Denies Having An Anger Problem On Watch What Happens Live

Adam’s response seemed lack of any real or genuine remorse for his behaviour which is disappointing, considering so many fans of the Below Deck franchise have supported him over the years.

A quick look at the #BelowDeckSailing hashtag on social media and it’s clear that despite his best efforts to shut down any criticism or critique about his performance this season, Adam has had to face the backlash and must be aware of what the general response has been to him this season.

What’s even more disappointing, however, is that despite still being in contact with Jenna, he used his relationship with the chief stew as a reason for his inappropriate behaviour this season. Love her or hate her, Jenna isn’t Adam and after so many years on reality TV, we’re surprised he would find such a ridiculous reason to excuse his behaviour.

As previously reported, Adam isn’t the only Below Deck Sailing Yacht cast member that has been faced with some backlash this season.

Chef Adam Glick and Chief Stew Jenna MacGillivray have had a tumultuous relationship on Below Deck Sailing Yacht. Adam seemed to blame some of his behaviour on their coupling during an appearance on Watch What Happens Live. (Photo: Bravo)

Jenna has rocked both the boat and the show since day 1 with her strong personality but has since posted a public apology on her Instagram, where she took responsibility for her actions and maintained that she would do better in the future.“It’s rare that I don’t get along with people. So doing this season was stressful to have conflict. I’m going to keep this short and simple. And I’d appreciate it if people took my words as truth, and not just an attempt to get favour,” she captioned the post.

“I apologize for some of my behaviour. It was not my intent to belittle or hurt people in any way, but I understand that’s what happened to some people, as a result of my actions,” she said. “No one is perfect. And when people say ‘I hope you’re watching and self reflecting’, I am. Some of the show is hard to watch. It’s different for me because I know my intentions but I certainly understand on all boats there are varying personalities and I am not easy for everyone.”

“I came in guns blazing,” she continued. “I wanted to give the best experience to the guests, and I understand that at times that meant I wasn’t focused on the girls. I should’ve spent more time. And that is a regret of mine. I was focused on Adam. And just managing everything to the best of my ability and sometimes I failed.

She explained, “I wanted to have fun with everyone. And I understand sometimes my words came across in a harsh way. And for that I am sorry. To Georgia, Madison, and Parker. I will never say any of you weren’t working your asses off. There were dynamics that were at times difficult. So again. I am sorry. I would never want someone to feel like shit because of me. And that’s the truth.⁣⁣”

Below Deck Sailing Yacht airs Mondays on Bravo and Slice. 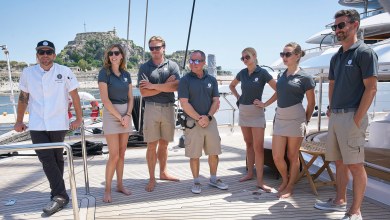