The Bravo executive is known for the open mouth, insert foot disease when it comes to discussing casting for The Real Housewives franchise, but how he is handling Tamra Judge and Vicki Gunvalson’s departure from RHOC is really telling.

In a new interview, Andy promises that despite firing both of them after over a decade of working together, they may have a chance at returning to the show at some point.

Well, Tamra does, at least.

“She’s been such an incredible part of the show for 12 years, that my only thing that I’ll say about her is, you have not seen the last of Tamra on the Housewives of Orange County,” he told Entertainment Tonight.

“Tamra, we love you,” he added, looking at the camera directly. “We’re not totally done!”

As previously reported, Vicki announced that she was leaving the show after 14 seasons just over a week ago and a few days later, Tamra followed suit and also announced her departure.

Since the announcements, the focus has turned to Andy in part because he plays the role of both friend and boss to the Housewives. Some fans remain confused by some of his statements because on one hand, he does have a say in letting them go from the show and in another, he is speaking for the Housewives by promising that they will return in some capacity.

In addition, both Tamra and Vicki have both made it clear that even though they would have preferred to return to RHOC, they were offered lowball contracts by production and decided to walk away, instead, which makes Andy’s comments even more awkward.

Hopefully, Andy can let the casting changes speak for themselves because, at this point, we’re only interested in hearing what Tamra and Vicki have to say about the situation. Vicki Gunvalson Confirms Lawsuit Filed Against Her Alleging Fraud Has Been Dropped: ‘Take That, Kelly Dodd!’ 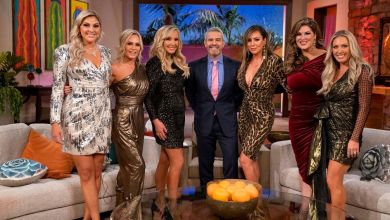