Andy Cohen Denies Rumors Nene Leakes May Be Fired From ‘RHOA’: ‘Everything That Was Shot With Nene Is In The Show’

Andy Cohen is coming to the defense of Real Housewives of Atlanta star Nene Leakes.

Nene, who is the show’s only original Housewife, has been featured less prominently on RHOA this season and it has resulted in some fans wondering if she is at risk of being fired.

As fans of the franchise are aware, Bravo is going through a bit of a reboot with the departures of longtime Housewives Lisa Vanderpump, Bethenny Frankel, Tamra Judge, and Vicki Gunvalson. It would only make sense for fans to question whether RHOA, like the other cities, will see casting changes after this season.

On Sunday night’s episode of Watch What Happens Live, Andy brought up the rumors with his guest, Kenya Moore.

In recent interviews promoting the new season of RHOA, Kenya has implied that Bravo executives are unhappy with her co-star and are featuring her less prominently in the episodes for a reason.

“I think everything that was shot with Nene is in the show,” he told Kenya, definitively. “We’re not cutting anything out.”

Recently, insiders suggested that RHOA producers are “desperate” to keep the show’s only original remaining cast member from leaving amid rumors that she stands to lose almost $3 million if she does quit the show.

As an all-new episode aired, the RHOA star took to Twitter to clarify that she isn’t happy with the negative rumors being spread about her.

“I HAVE NOT been cut out of any episodes,” she posted. “I negotiated my episodes just like everyone else did!”

While Andy and Nene are both trying to make it clear that she wasn’t cut out from any of the episodes, even a casual viewer can tell that RHOA producers are trying to send a message to her loud and clear.

Denying the rumors in this way only adds fuel to the fire and at this point, we’re ready to talk about something that actually took place on the show, if anyone would like to join us. 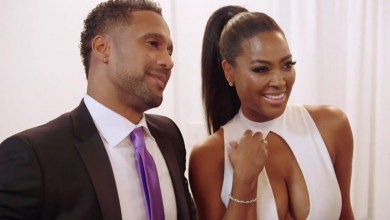